It’s midsummer, when much of the media and marketing world slows way down. But in this day and age, digital marketing statistics never really stop.

Here are the eight most interesting numbers we saw in the last week:

2. Media giant Meredith surveyed more than 2,600 adult women at the end of last year, finding that 90 percent of millennial females visited Facebook once a week, while 77 percent accessed YouTube every seven days.

4. Ad blocking will cost publishers nearly $22 billion in 2015, according to a new Adobe report. Yikes.

5. Genesis Media, which surveyed more than 11,500 U.S. adults in late May and early June, found that while 24 percent of respondents installed ad blockers on either their home or work computers, just 3 percent did so on their smartphones or tablets.

6. It’s that time of year when brands like Elmer’s, Mead, Staples and Target are gearing up for a sales boost thanks to back-to-school shoppers. According to a new Retale study, they should put a healthy focus on mobile. The digital-deals company said it surveyed 1,000 adults with kids in grades K-12 and found that 78 percent of parents will use a smartphone for back-to-school shopping.

7. Last Wednesday night, Arby’s thanked Daily Show host Jon Stewart for all the mockery at its expense over the years with a 60-second spot during his penultimate episode as host of the show. The savvy, self-deprecating move worked wonders for the brand. Amobee Brand Intelligence reported that the spot boosted tweets about the roast-beef slinger by 564 percent—from 130 to 1,130—in a before-versus-after comparison.

8. Thirty percent of all Tinder users—who are supposed to be single—are married, per a new report from GlobalWebIndex. Seventy-five percent of those married folks consider themselves “risk takers,” the research company found. So, if marketers want to target compulsive-minded consumers, the ultra-popular dating app may be worth exploring. After all, Tinder ads worked pretty well last spring for the movie Ex Machina. GlobalWebIndex also found that 80 percent of Tinder users were more inclined to take a selfie than the average person. OK, file that one under “Interesting, But Not a Huge Surprise.” 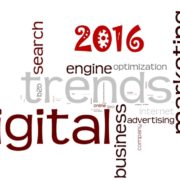 8 Digital Marketing Trends to Watch in 2016 How to Create Digital Marketing Plan for Start-Ups Will My Organic Rankings Suffer If I Don’t Have a Blog?